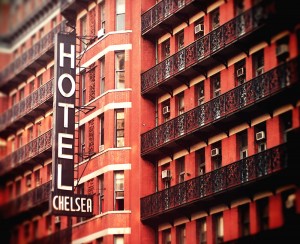 The Hotel Chelsea – also called the Chelsea Hotel, or simply the Chelsea – is a historic New York City hotel and landmark built between 1883 and 1885, known primarily for the notability of its residents over the years. The 250-unit[2] hotel is located at 222 West 23rd Street, between Seventh and Eighth Avenues, in the neighborhood of Chelsea, Manhattan. The building has been a designated New York City landmark since 1966,[3] and on the National Register of Historic Places since 1977.[1][4]

It has been the home of numerous writers, musicians, artists and actors, including Bob Dylan, Virgil Thomson, Brigid Berlin, Brendan Behan, Sam Shepard, Charles Bukowski, Janis Joplin, Tom Waits, Leonard Cohen, Patti Smith, Iggy Pop, Viva, Gaby Hoffmann, Jim Carroll, Jobriath, and Larry Rivers. Though the Chelsea no longer accepts new long-term residencies, the building is still home to many who lived there before the change in policy. As of August 1, 2011, the hotel is closed for renovations.[5] Arthur C. Clarke wrote 2001: A Space Odyssey while staying at the Chelsea, and poets Allen Ginsberg and Gregory Corso chose it as a place for philosophical and artistic exchange. It is also known as the place where the writer Dylan Thomas was staying when he died of pneumonia on November 9, 1953, and where Nancy Spungen, girlfriend of Sid Vicious of the Sex Pistols, was found stabbed to death on October 12, 1978. Arthur Miller has written a short piece, “The Chelsea Affect”, describing life at Hotel Chelsea in the early 1960s. 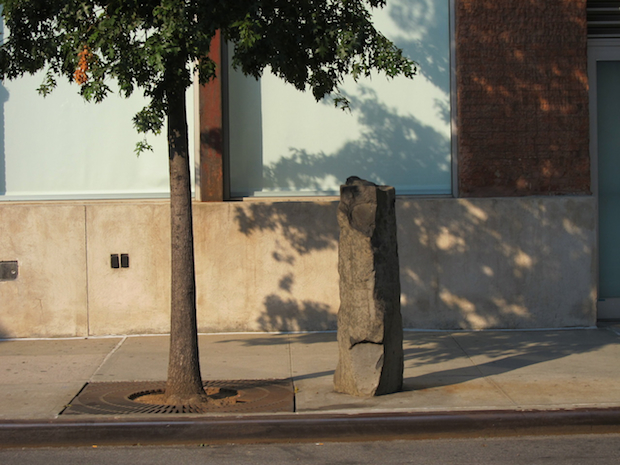 Beuys’s project 7000 Oaks was begun in 1982 at Documenta 7, the large international art exhibition in Kassel, Germany. His plan called for the planting of 7,000 trees, each paired with a columnar basalt stone approximately four feet high above ground, throughout the greater city of Kassel. With major support from Dia Art Foundation, the project was carried forward under the auspices of the Free International University (FIU) and took five years to complete, the last tree having been planted at the opening of Documenta 8 in 1987. Beuys intended the Kassel project to be the first stage in an ongoing scheme of tree planting to be extended throughout the world as part of a global mission to effect environmental and social change; locally, the action was a gesture towards urban renewal. 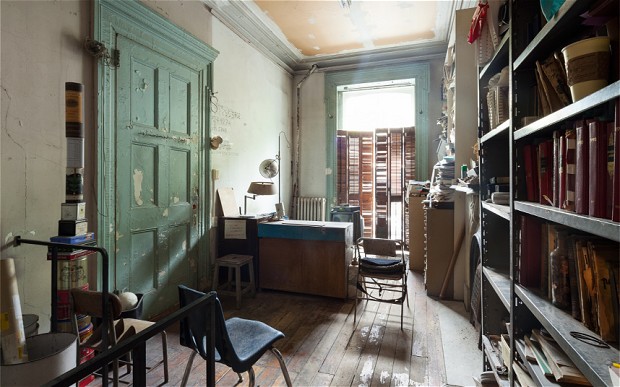 When Louise Bourgeois first moved into her Chelsea townhouse in 1961, her name was virtually unknown in the art world. Though she sculpted and drew every day since she moved to New York from Paris in 1938, it wasn’t until 1980–when she was 69–that her drawings first appeared in a gallery. The exhibit was a success and helped to give rise to her career as professional artist. Two years after her gallery debut, the Museum of Modern Art held a retrospective exhibit of her work, which marked her place in the international art scene. “She was already 70, yet things were just beginning,” said Jerry Gorovoy, Bourgeois’ longtime assistant and friend.

At her West 20th Street home, the artist famously held weekly Sunday afternoon salons where she invited major artists like photographer Nan Goldin and art students alike to exhibit their work while she gave sharp feedback. The salons, Gorovoy said, became like group therapy. Bourgeois wanted to know everything about each of the artists and their lives.

Bourgeois is most famously known for her colossal Spider sculptures, which evoke the bitterness and betrayal she felt as a child as a result of her father’s affair with her tutor. These sculptures made Bourgeois the highest paid woman artist at the time of their auctions at Christie’s in 2006, 2008, and 2011.

The building that served as both Bourgeois’ home and studio dates back to the 1850s and is now part of the Chelsea Historic District.