In 1971, Welfare Island, which was primarily used for hospitals, was renamed Roosevelt Island and a monument was to be build to commemorate the late president Franklin D. Roosevelt. American architect Louis Kahn completed the memorial designs in 1973, but the project was shelved indefinitely due to the city’s near-bankruptcy at this time. In 2005, a documentary film by Kahn’s son and a Cooper Union exhibition raised awareness of the memorial and $52 million in funding. Construction began in 2010 and on October 17, 2012, the memorial opened to the public – almost 40 years after it was first conceived.

In his 1941 State of the Union speech, Roosevelt declared “Four Freedoms” – of speech and expression, and from want and fear – as basic human rights. With these in mind, he navigated the nation out of the Great Depression, through the Second World War, and finally toward peace and prosperity. His New Deal program provided work for architects like Kahn, who in turn contributed to community housing projects. Kahn shared the president’s optimism and felt that architects, too, had a social responsibility to serve the public.

The memorial adheres closely to Kahn’s original vision, which specifies 140,000 cubic feet of North Carolinian granite from Mount Airy, and the planting of beech and linden trees. Kahn leaves 1-inch gaps between the 36-ton granite blocks, which are highly polished only on the inside of the gap, playfully reflecting views from the other side. The centerpiece, a 1,050-pound bronze head of Roosevelt, was sculpted by Jo Davidson in 1933. The entire site had to be elevated fifteen inches to account for climate change. The site’s resemblance to a ship is a nod to Roosevelt’s love for the sea. The once Assistant Secretary of the Navy was also an avid collector of nautical paraphernalia.

This park is not just a memorial to Roosevelt, but also to Kahn. Known for his monumental and monolithic style, Kahn offered an alternative to the glass-and-steel International Style highly favored then. With a keen sense of space and light, Kahn displayed a modernism never before seen in brick and bare concrete. Unfortunately, Kahn did not realize many of his designs as he was difficult to work with and lost money on every project except the Salk Institute, one of his masterpieces. He was half a million dollars in debt when he died from a heart attack at Penn Station in 1973. He was found carrying the designs of the Roosevelt memorial–his last commission and the only one in New York City.

Nineteenth-century New York saw the rise of organized crime and large outbreaks of smallpox despite the availability of the vaccine. In its efforts to expand correctional and medical operations, the city looked to the remote little island on the East River, accessible only by boat until the 1930s. The gothic ruins was the Smallpox Hospital was designed in 1856 by James Renwick and was first of its kind to quarantine and treat victims of contagion. Strecker’s Laboratory, the squat building with a blue door, also supported City and was the first in the nation for pathological and bacteriological research. It currently conceals a converter that powers the underground subway. Both institutions were part of the largest hospital, City Hospital, which, at its peak, served 8,000 patients annually. City Hospital no longer stands, but its salvaged stone now line the paths at the Roosevelt memorial.

The penitentiary used to stand near the Smallpox Hospital. Its imposing “castle-like” complex had wings that spanned north to south from the center of the island. Famous inmates include actress Mae West, who served eight days for “corrupting the morals of the youth” with her scandalous 1926 Broadway play, Sex. Tammany Hall leader William “Boss” Tweed was sentenced 12 years for laundering millions of dollars through graft, but was let out after a year on appeal. He was quickly rearrested for further corruption, but escaped to Cuba, making it as far to Spain before being extradited back to America and living out the rest of his days in Ludlow Street Prison. The penitentiary closed in 1935 when a new one opened on Rikers Island.

In the north, the lobby of The Octagon was originally the entrance of the lunatic asylum, the nation’s first mental hospital, the horrible conditions of which were exposed by Nellie Bly in her 1887 book Ten Days in a Mad-House. Nearby, the 50-foot lighthouse with echoing octagonal shaft was built in 1872 by penitentiary inmates. There used to be a plaque at the base attributing the work to John McCarthy, an asylum patient whose name and existence has never been proven. According to legend, this patient built a sizable “fort” out of mud in fear of a British invasion. He cleared most of the marsh until he was eventually bribed with fake money to abandon the project so the lighthouse could be built. In the ‘50s, most of the hospitals closed when operations moved to Queens. After two decades of abandon, the island was finally redeveloped into the quiet residential community you see today. 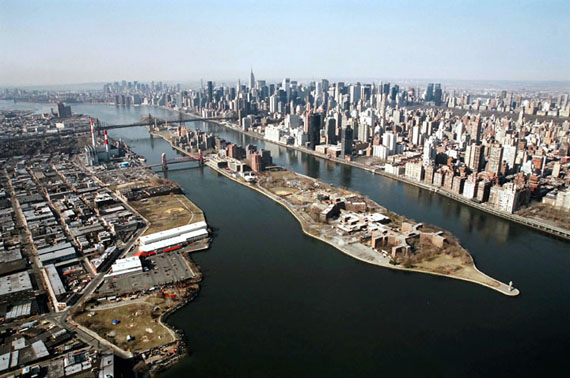 Now a popular day getaway, Roosevelt Island was once notorious for holding the dregs of society in some of the city’s first modern medical and correctional facilities. In fact, the island was called Welfare Island before it was renamed in 1972 to honor Franklin Roosevelt. For two and a half century before that, it was known as Blackwell’s Island, the namesake of the family who owned it for many generations. They were descendants of the English captain who seized it from the Dutch in the late 1700s. The Dutch, who called it Hog Island because they raised pigs on it, bought it in 1637 from the Lenape tribe who gave it its first name: Minnahanonck or “nice island.” It’s a name that rings true today for the quiet residential neighborhood. Peppered throughout the island are remnants of its grim history. 500 feet north of the train station stands the Blackwell ancestral home, the sixth oldest house in the city. In the south, the gothic ruins were once the Smallpox Hospital, the first to treat contagious diseases. In the north, The Octagon apartments’ lobby was previously the entrance of the New York Lunatic Asylum, the country’s first mental institution. The 50-foot lighthouse at the northernmost tip was built in 1872 by asylum inmates with stone quarried locally.

In 1969, the city granted a 99-year lease of the island to the state of New York’s Urban Development Corporation (UDC) to develop and operate the island. It was soon transformed into an innovative, mixed income, traffic-limited, and sustainable residential community. Designed with the many disabled and elderly residents in mind, the whole island is wheelchair accessible. Along with Disneyland, the island is well-known for its use of Automatic Vacuum Waste Collection (AVAC) system that transports waste at high speeds through underground tubes to be sorted and cleared. Furthermore, The Octagon is the first residential complex in the city to be powered by fuel cells, which converts natural gas to electricity and heat via a combustion-free, electrochemical process. Because of the island’s proximity to the United Nations headquarters, U.N. employees make up 30 to 40 percent of the island’s population. Former Secretary-General Kofi Annan used to lived at 575 Main Street. Roosevelt island is, however, best known and cherished for its red aerial tram, which appears in the epic 2002 film, Spider-Man. The Roosevelt Island Tramway has transported over 26 million riders since it began operating in 1976 as a temporary solution while the subway was being build. Until 1984, it was the only commuter aerial transportation in North America.