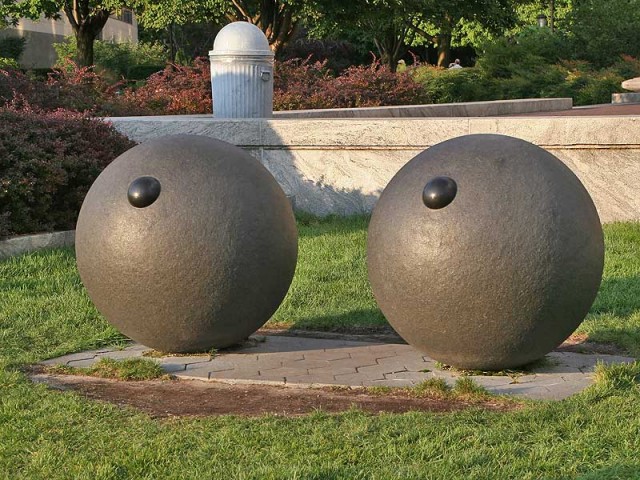 Resting directly on the ground a calculated distance from each other, the two eyes occupy considerable volumes of space between and around them which the viewer is invited to fill in with his or her own imagination, since the eyes are separated from any suggested surrounding physiognomy. Carved in granite, the pupils are not inset but suggested by large polished nodules and an integral part of the whole granite “eyeball.”

Louise Bourgeois was a French-American sculptor and artist. After moving to New York City in the late 1940s, she took up sculpture as her primary form of expression. She is most famously known for her colossal Spider sculptures, which evoke the bitterness and betrayal she felt as a child as a result of her father’s affair with her tutor. These sculptures made Bourgeois the highest paid woman artist at the time of their auctions at Christie’s in 2006, 2008, and 2011. 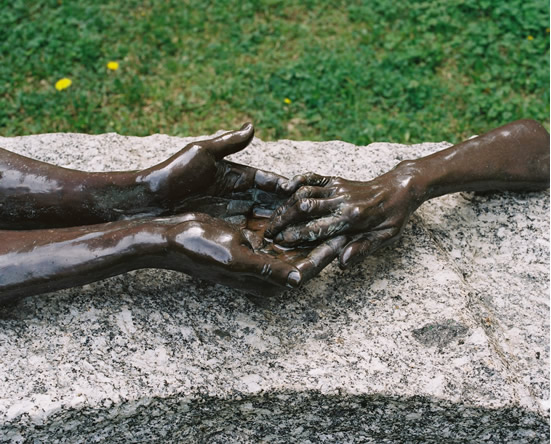 Louise Bourgeois sculpted “The Welcoming Hands” as a way to symbolize love and kindness. The six bronze sculptures, installed in 1996, take the form of hands holding hands, a simple and common gesture. However, “The Welcoming Hands” sparked a controversy before the Museum of Jewish Heritage opened in 1997. The Battery Park City Authority, who is responsible for the sculpture, decided to move Bourgeois’s sculptural group because they were concerned some visitors to the museum would view them as dismembered body parts. To prevent this from happening, the Battery Park City Authority moved the sculptures 100 feet further away from the museum. Bourgeois was not notified of the relocation, and her assistant was upset that Bourgeois had not been alerted beforehand. 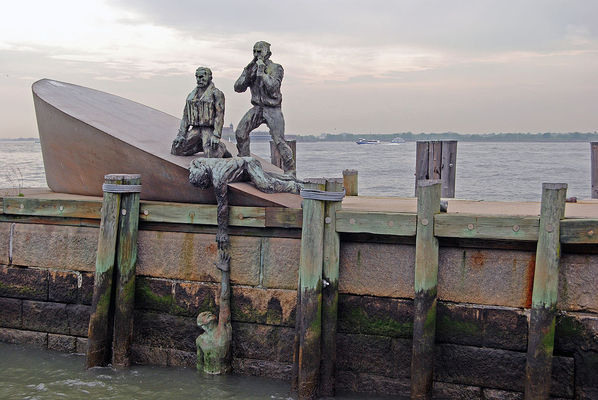 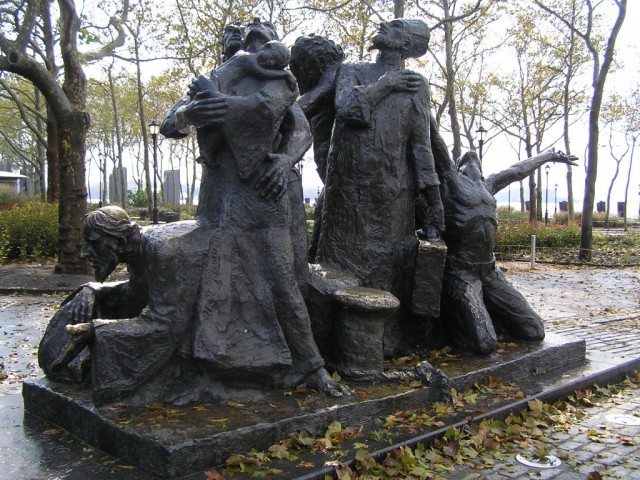 Spanish sculptor Luis Sanguino’s sculptural group at Castle Clinton, “The Immigrants,” commemorates the arrival of immigrants setting foot in the United States for the first time. Six figures of different ethnicities and origins make up “The Immigrants.” Although immigrants came to New York from many different places, Sanguino’s sculpture celebrates the the common elements of their experiences. The placement of the sculpture is symbolic: Castle Clinton was formerly known as Castle Garden, and it was New York’s first immigration center before Ellis Island opened in 1892. 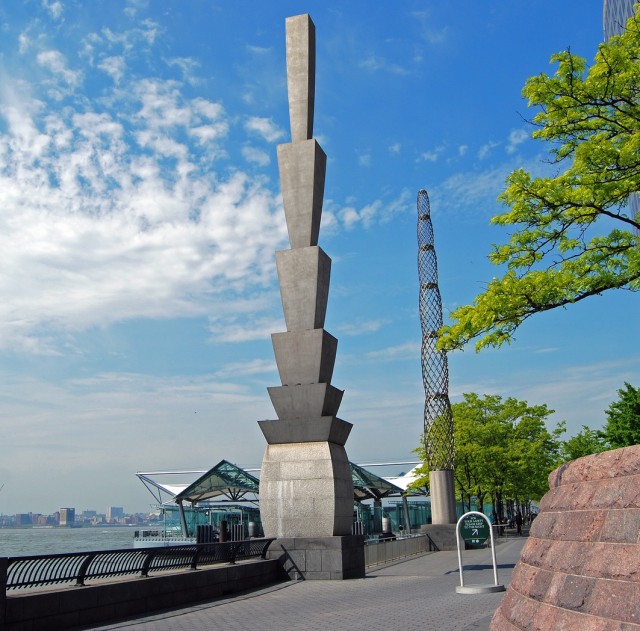 Martin Puryear’s “North Cove Pylons” act as a gateway to New York. The minimalist sculptures create a dialogue based on their forms and volume. One of the pylons is solid, heavy, and angular; the other is mesh-like, round, an empty volume. Illuminated at night, they are similar to lanterns. Puryear’s sculptures focuses on minimal and abstract compositions. Puryear began his artistic career in printmaking, but his retrospective at the MoMA in 2007-2008 focused on sculptures from throughout his career. 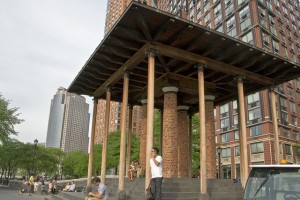 Rising from the scenic lawns of Governor Nelson A. Rockefeller Park below the junction of River Terrace and Warren Street, The Pavilion occupies a unique position in the landscape, as if negotiating a common ground between the greensward and the city beyond. Because the structure has no walls, both the park and the hubbub of downtown are eminently visible through its posts. The Pavilion is crowned by a handsomely crafted square wooden roof, supported along its edges by twelve thin wooden pillars and at its center by four Doric style brick columns. Between the columns is an upraised platform girded by a bank of low stone steps, which provide ground-level seats for people-watching, hiding from the sun and looking out on the great lawn below. With its pared-down, classical elegance and appealing mix of styles, The Pavilion is a functional and symbolic way-station and a gracious response to the architectural cacophony of the surrounding city. 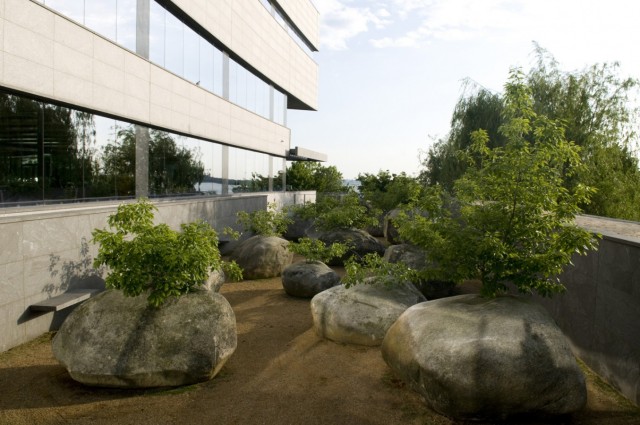 Andy Goldsworthy’s installation at the Museum of Jewish Heritage is a contemplative space for visitors as well as a memorial of the Holocaust. The trees, planted in rock by Holocaust survivors, their families, and Goldsworthy, symbolize human resilience. The boulders might seem like a deterrent to growth, but over time, they will be enveloped by the trees. Adding to the symbolism of the garden are the number of boulders – eighteen. The Hebrew word for eighteen, chai, is the root word of l’chaim, a toast to life. 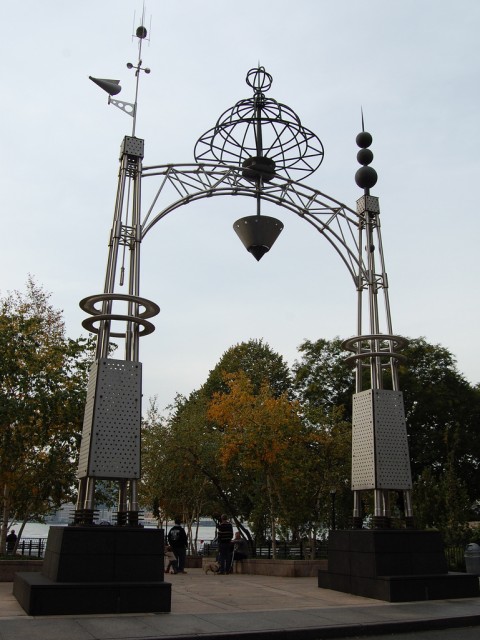 Inspired by science fiction and structural design, R.M. Fischer designed “Rector Gate” in 1988. Fischer’s gate, which reaches a height of fifty feet, references the building and engineering of skyscrapers. Spindly pinnacles with spherical attachments and a wire-framed dome add to the otherworldliness of the sculptural gate. Fischer works with many different materials, including fabric and other metals. One of his most recent exhibits involved the use of stuffed fabric sculptures.

Ned Smyth’s “Upper Room” brings history into the Financial District. The design is based on the architecture of ancient Egyptian temples, and is tiled in red mosaics. “The Upper Room” functions as a plaza with benches and chess tables, closed in by mosaic columns which reference the lotus capitals used in Egyptian temples. Completed in 1987, the sculptural plaza marks the entrance to the Albany Street Esplanade, and was the first commissioned artwork in Battery Park. Now, as Battery Park continues to develop and expand the public artwork in the park, “Upper Room” serves as a reminder of ancient cultures and history. 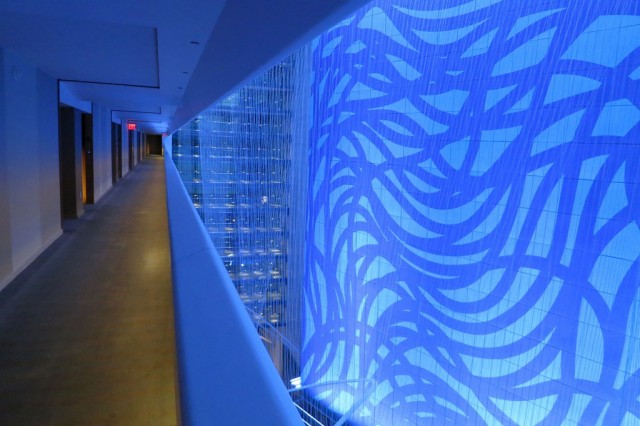 Sol LeWitt is known for his linear and geometric large-scale wall drawings and sculptures, but one of the last series he did before his death in 1997 was the Loopy Doopy series. These large murals and paintings were designed with two pencil taped together, with which LeWitt drew curving, organic shapes and lines. The 80 by 100 feet “Loopy Doopy (Blue and Purple)” was installed in the Embassy Suites lobby in 1999. It took fifty people working in the Brooklyn Navy Yards four months to complete. In 2006, Goldman Sachs bought the hotel, and renovated it to the Conrad Hotel in 2009; LeWitt’s artwork remains the focus of the lobby atrium. The rooftop bar at the Conrad is named Loopy Doopy, after the piece, and the hotel maintains an art collection which includes work by Frank Stella, Jeff Koons, and Elizabeth Peyton. Other paintings from LeWitt’s Loopy Doopy series can be seen at the Metropolitan Museum, Los Angeles County Museum of Art, MoMA, and the Whitney. 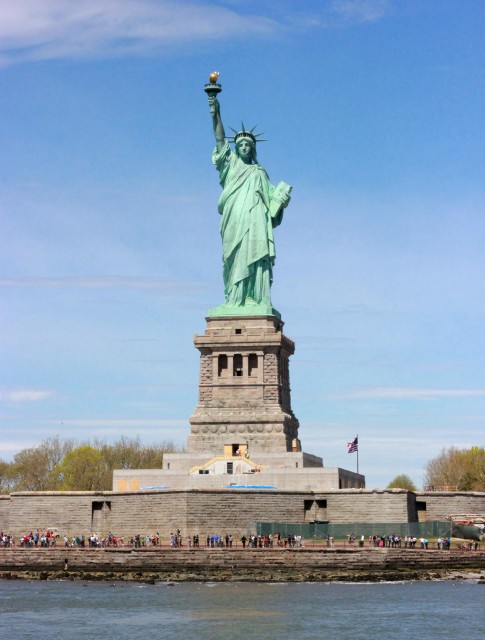 The Statue of Liberty, French sculptor Frédéric Auguste Bartholdi’s colossal sculpture, symbolizes more than friendship between France and the United States. Living in France under the rule of Napoleon III, Bartholdi held the United States’ ideal of liberty in high regard, and wanted to celebrate this. Bartholdi collaborated with structural engineer Gustave Eiffel and American architect Richard Morris Hunt, who designed the statue’s base. Bartholdi sculpted the statue in his Paris studio in over 300 parts, which were then shipped across the Atlantic. Before the statue’s dedication in 1886, parts of Lady Liberty went on tour to Boston and Philadelphia to help raise funds. On October 29, 1886, the city celebrated the unveiling of the statue with parties, parades, and speeches by dignitaries, including President Grover Cleveland.

Brian Tolle’s Irish Hunger Memorial replicates a quarter-acre of Irish countryside, raised on a piece of limestone to a height of 25 feet above street level. The carefully designed landscape contains Irish plants and stones from every Irish county, as well as a stone cottage that was built in the 1820s and relocated from Ireland to this memorial. Glass panels and stones throughout the memorial have lines of poetry and songs and statistics about hunger worldwide. Tolle collaborated with Gail Wittwer-Laird and 1100 Architects on this project, which opened in 2002. Unfortunately, the climate of Ireland is very different from that of New York City, and the memorial needed extensive repairs in the spring of 2003 in order to fix leaks, drainage issues, erosion, and walkways that became dangerously slippery in the rain. 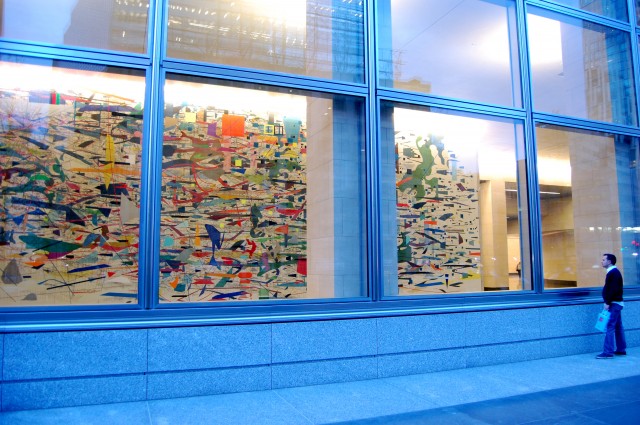 Julie Mehretu’s “Mural (2010)” at Goldman Sachs is simultaneously captivating and frustrating. Located in the Goldman Sachs lobby, visitors are not allowed to see the mural up close. Mehretu’s detailed painting, with clean shapes and abstract narrative, was created with four layers of paint and in a similar style as her other paintings. This mural tells the history of finance and capitalism but reveals the culture of power and wealth of this corporation. In fact, the placement of Mehretu’s mural tells more about the environment and secretive nature of the company, and their lack of relationship to members of the public. 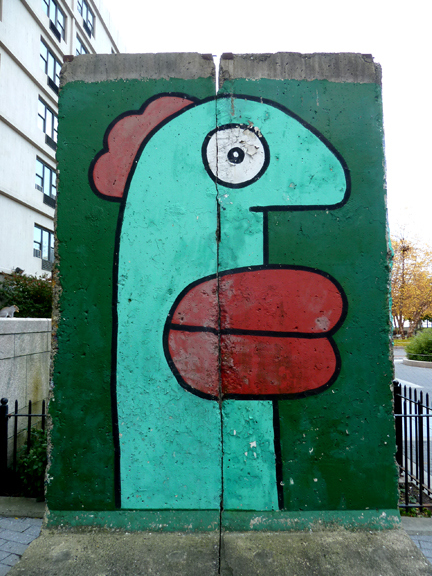 Thierry Noir used art as a political act when he painted the Berlin Wall in the 1980s. After moving from France to West Berlin, he joined the youth and artist culture in the city. He could see the wall from his apartment, and so he decided to reclaim the wall for the people by painting on it. Because this was a very dangerous act of political subversion, Noir made simple designs that could be completed more quickly. This portion of the wall was donated by the German Consulate to the Battery Park City Authority in 2004. 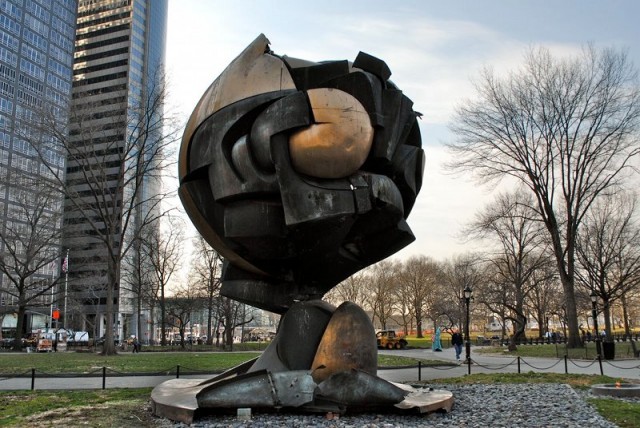 Fritz Koenig’s “Sphere” between the Twin Towers was installed in 1968 to symbolize world peace, but after it survived the events of 9/11, it became a symbol of resilience and hope. The sculpture was damaged, with scratches, dents, and parts of the orb split open, but it was structurally sound. “Sphere” was moved to Battery Park in March 2002, where it served as a memorial and an eternal flame is lit. There was some debate over the location of the sculpture; some wanted it to go to the 9/11 Memorial, while others wanted it to stay at its present location. Among the groups pressuring the Port Authority to move it to the memorial site at Ground Zero was a group of 9/11 victims’ family members, led by Michael Burke. “Sphere” remains in Battery Park as a literal reminder of the events, while the 9/11 Memorial does not include objects from Ground Zero.